On Thursday 17h15 we left our hometown fully packed with Assisi as our destination. We, that is just 2 persons with a GP and Li/2 in the back of the van.

We had a rendezvous with our third man along the way in Germany somewhere at the Freiburg region. Along the way in the Ardennes we saw 3 other Belgium guys also packed and riding direction Assisi. After the obligatory stop in Luxemburg for food and drinks for both car and humans we set of for Metz, Strasbourg and finally reached Freiburg around 12 pm. After some beers that were set aside for us by our third man (bar was closed already) we were ready to hit the sack. In the morning we crossed the Swiss border at Basel and we travelled the Alps along the endless Swiss tunnels and bridges. We were lucky there was no jam at the 13km long St. Gotthard tunnel and soon we crossed the Lugano lake and shortly after we saw the Italian Como lake where we had our lunch. In the afternoon we took the Milano ring, crossed Parma, Modena, Bologna, Firenze and finally left the payable motorway near Perugia. Then some 20km more to reach the campsite in Assisi, we were just in time to see the sunset on the beautiful Assisi village.
On the campsite we met almost immediately with the Belgium couple already there, so that made 5 Belgium participants then and 3 more to be expected that were on a detour to Rimini. Quite a few tents were already in place and after the check-in, our tents had to be erected under artificially light. Friday we made a quick inspection round (in daylight now) and the we decided to go for a visit to the old Assisi. After a nice hill-climb we soon were ready for drink in a local pub. It’s nice to

hear the exhaust noise reflecting on the walls in the narrow streets of old Assisi. It’s always tempting to spin the engine up a bit, but we have to keep inhabitants happy so we hold our horses. At 4.00 pm there was the first organised ride-out, a very impressive site to see 400+ Lambretta scooters in a row, at least for those at the beginning of it, at the end it gets a little misty. We passed along many little towns like Capodacqua, Spello, Bevegna, Cantalupo, Cannara, Castelnuevo and finally Santa Maria degli Angeli (where Sergio has his extended scooter collection). Halfway there was stop right in the city centre where the escorting police men had to do their extreme best to guide everyone to the right place. We were invited to have some ‘Porcehetta e vino’. Back on the campsite we prepared ourselves for the evening where a Italian band was responsible for the ‘Serata Musicale’.
On Saturday’s program there was a ride out at 10:30 and another at 16:00 with a lunch in between. It was only when we arrived around noon at the Piazza IV Novembre in Perugia that we really felt how hot is really was. The whole square was occupied with Lambretta scooters, most models from the whole production period were present including some A’s, although the J and Vega line weren’t very numerous. At the church there we all could witness the marriage of 2 American scooterists, Jon and Missi Kroge. Vittorio Tessera arranged some wheels for them 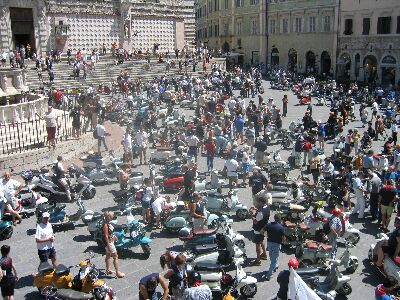 in the form of a special ceremony car from Innocenti. About 1 hour later everybody set off to the next stop for lunch.
Some riders who didn’t attend the morning ride out missed their lunch as both ride outs were connected with the lunch which was held at some kind of sports hall away from the campsite, understandable as this wasn’t very clear in the program guide. After lunch there was some kind of an acceleration contest but the rules weren’t very clear for most of the non-Italians.
In the evening everything was made ready for the traditional gala dinner. No expenses were spared to make it a success, about 6 or 7 dishes passed our tables accompanied with plenty of wine. After dinner it was trophy time and another band stood for the musical part. There also was a free shuttle to a nearby all-nighter in Perugia. A shame that this wasn’t possible at the campsite itself. After a short night rest is was time to start packing again, by noon most of the scooterist were already gone, making plans along the way for Euro Lambretta 2004 in Scotland.
www.lambrettaclubumbria.it

A photo collection about the Belgian participants in Italy

In and around the Assisi International Camping

Photos on the first center-stop at friday and the second saturday in Perugia.

Some nice photos along the beautiful Umbria green roads.

Almost the complete Lambretta range was present at the Jamboree 2003