We left Zeebrugge port at 18h00, just got the Superfast ferry at 17h30.
Nice buffet on board, a drink at the bar and ready to hit the sack.
Next morning time for a walk of the ferry, nice recent build ship with all modern facilities, on the upper deck there are even some suites and a fitness club with sauna. Breakfast at 9h00 and at 10h00 the 2 bridges of Rosyth are already in sight. 11h00 locale time we left the Ferry.

After a good 100km ride, or should I use miles in this country where they drive at the wrong side of the road, we finally arrived at the campsite, ‘The Kelso Agriculture Showground’ or Springwood park at walking distance from the city centre just across the river Tweed.
Already a vast amount of tents were already erected on the campsite an after some welcome greetings and as soon our tent was also installed it was yet time for the first ride out. The planned trip of 80 miles was shortened somehow to a more realistic distance of 55 miles in the direction of Selkirk. After this ride out through the country side we arrived back at the campsite. Not all scooterists attend every ride out, after all some of them had already several hundreds of miles of scooter driving done to arrive here. To keep them busy, dealers stalls were exposed all weekend long as well indoors and outdoors. 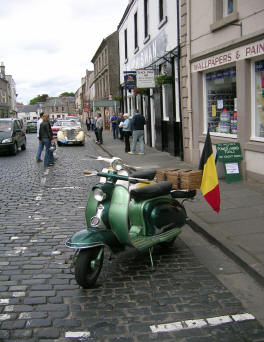 Before dinner there was some time reserved for the national boards to share thoughts and plan actions for next events.
At 8:00 pm we’re all invited to enjoy a splendid organised dinner followed by a late night disco.
Next morning there was some spare time before the 11 o’clock ride out to have a look around the campsite. Almost the complete Lambretta range was at display, although no model A, no Lambro’s, no Cento’s and only one 3-wheeler, a FD model from the Dutch LC. Also a lot of tuned machines in al grades with expansion pipes sticking out at rear right side.
The second ride-out for this WE started at 11am for about 3 hours with a scheduled stop at Duns for re-fuelling both scooters and riders. In the last 5 miles on the way back my rear tube valve decide to part from the tube. Reaching the left hand side with a flat rear when 100+ Lambretta’s are chasing you isn’t the easiest thing on earth but I managed to stop without further damage. When the backup van brought me back in  they told me some other rider got involved in a traffic accident and was taken to hospital, sic.
Back on the campsite, there was time for some Highland games, pipe band, club stands and of course the Concourse de Elegance. 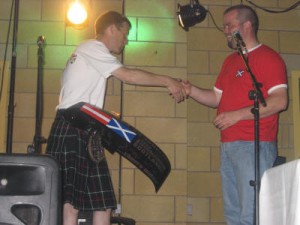 At 7.00pm we were expected for a royal dinner with a choice of chicken, veggie, or haggis of course. Followed by a presentations of the international clubs and some more dancing fun.
Sunday morning those still alive were expected for the last breakfast. Then start packing and prepare the ride back. At 11am the results of De Concourse de Elegance were announced, then people start to shake hands and say goodbye, until next year.